The Peace and Plenty Inn offers eight deluxe suites and is proud to serve as a historic boutique hotel. Each suite is complete with its own luxurious bathroom including a whirlpool bath and fine towels. Other suite amenities include king or queen sized canopy or four poster beds, exquisite linens, cable television, central A/C and heat, iron, hair dryer, and electric fireplaces providing romantic, safe glowing flames. The inn is also equipped with the latest fire safety/sprinkler technology. Free Wireless Internet access is available throughout the Inn.

Paint color, furniture, and decor may be changed / altered due to updates and refresh of the property.

The Peace and Plenty Inn is a luxurious get-away and the perfect romantic setting for any special occasion. A sumptuously furnished apartment with kitchen is available for longer stays in St Augustine. All guests can enjoy the private walled garden featuring our elegant fountains, fire pit, and opulent loggia with comfortable furnishings. The Peace and Plenty Inn has a no smoking policy. Smoking is allowed outside.

We serve breakfast daily but you are in walking distance to the Ancient City's best restaurants; please ask our innkeepers at check-in about our recommendations. 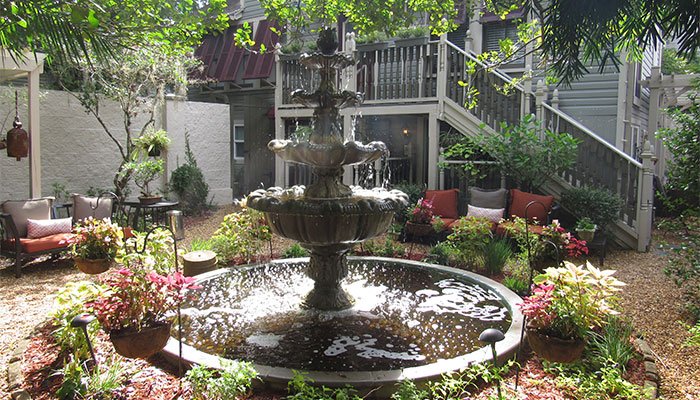 Around the Peace and Plenty Inn

In classical mythology, Elysium was known as a place of perfect happiness, in the form of an ideal garden. At the Peace and Plenty Inn, the garden gates open into an Elysium, a relaxing natural atmosphere. We take great pride in our tropical hideaway and we are certain you will find a bit of joy and peace in Mother Nature's arms. So sit under the pergola and understand why the Spanish named our state "La Florida," the flowering.

Take your time and lounge awhile. Your spirit will be soothed by the sound of the cascading fountain. The garden has been the perfect romantic backdrop for engagements, and couples who just want to get away from it all.

In the evening the garden is a glow with subtle landscape lighting which softly illuminates and emphasizes the natural beauty of the historic home. You are welcome to bring in your meals for lunch or dinner and enjoy garden dining.

Our unique garden lounge offers a place to visit with friends, a quiet hideaway to read a book or just to doze off and relax after a day of shopping or touring in St. Augustine. Enjoy an after dinner drink and cigar in the loggia amidst the fresh St. Augustine evening breeze. The propane fire pit adds a cozy romance. 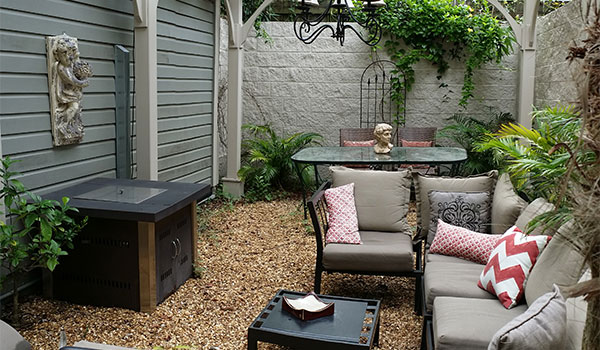 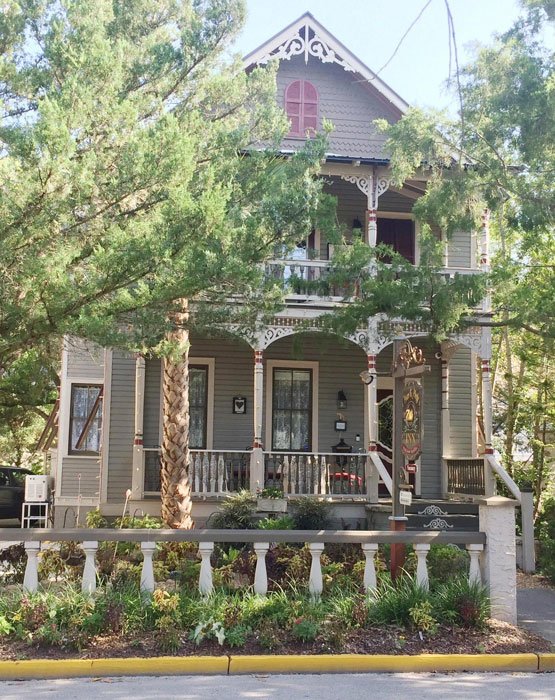 History of the Peace and Plenty Inn

The house was built in the early 1890's by Conrad Decher. Mr. Decher was a wealthy German who immigrated to Boston. He and his wife, Sophie, came to St. Augustine for the social seasons (January through March). He built the first Bridge of Lions for his train line to service the beach area. The home fell upon hard times at several stages of its life but was painstakingly restored between 1996 and 2001 by the current owners, the Terrell family - we have the scars to prove it! The work was chronicled on HGTV's "If Walls Could Talk" and the inn is now a shining example of Florida's Victorian architecture and a bygone era of dazzling wealth and privilege.

The inn may be over 110 years old but she is young by St. Augustine standards! In 1513, when Ponce de León first saw Florida near the mouth of the St. Johns River, the flowers were in full Easter bloom so he called it La Florida (the flowering). Although de León did not stay long, the name has never left us.

In 1562, a French Huguenot settlement at the mouth of the St. Johns River was considered to be a serious enough threat by Philip II of Spain for him to send an expedition to rout it. That expedition, led by Pedro Menéndez de Avilés, succeeded and then moved down the coast. Menéndez left a small force in the natural harbor of "St. Augustín." On that site, on September 8, 1565, Menéndez officially claimed Florida in the name of Spain. The native Timucuans looked on in disbelief.

St. Augustine continued as the center of Spanish control for the Atlantic coast. In 1586, the English sailor Sir Francis Drake attacked and burned St. Augustine but the Spanish rebuilt it. During the 16th, 17th and 18th centuries, St. Augustine suffered repeated attacks from English expeditions and from Native Americans but the Spanish managed to maintain control. However, under the Treaty of Paris, England acquired Florida as one of the prizes of the French and Indian War.

In 1783, England returned Florida to Spain but the United States succeeded in negotiating for full control of the peninsula and it became a territory of the young nation in 1821.

The end of the war marked the beginning of St. Augustine as a place to visit. Its Spanish-styled architecture, its outstanding natural surroundings and its perfect climate made St. Augustine a favorite of northern visitors.

Henry M. Flagler saw the city's enormous potential and purchased a railroad to bring passengers from New York to St. Augustine. The ride took less than 24 hours. His two grand hotels, the Ponce de León Hotel and the Alcazar, were grand enough to attract the rich and famous. St. Augustine was definitely on the map!

If, at any time, you have specific questions or concerns about accessibility, please email us at info@peaceandplentyinn.com

The Peace and Plenty Inn is a Licensed and Inspected property.

We are committed to making our website ADA compliant. Read our accessibility statement